I don’t usually invest in stocks.
However, because I was interested in the Japanese economy and companies, I found shares with interesting properties.

It happened when I was watching “season 3 of Bachelor Japan” by chance.
Because “Bachelor Japan” is an Amazon prime video program, a large amount of budget is invested in production.
For this reason, there are many attractive locations that do not appear in Japanese TV programs. (Japanese programs have a low budget and a small scale.)
For this reason, Japanese fans are looking for information on the locations featured in the program.
So, I was researching to introduce the location used in the program.

Part of “Bachelor Japan Season 3” was set on Guam.
While performing on Guam, the performers stayed at Leopalace Resort Guam and dated a bachelor man at the adjacent golf course.

When I learned that this program was being held at Leopalace Resort Guam, I was wondering if I should introduce it to anyone looking for information.

This is because the rental housing service provided by Leopalace21 was notorious in Japan.（This will be detailed later.）

Indeed, hotel business and rental housing services are separate businesses of Leopalace21.
However, if you stay at a hotel you can’t trust, there is a risk that people who are longing for the program will be unhappy for the fans of the program.
Therefore, I was wondering if I should introduce it.

Therefore, I decided to introduce it after careful research.

Then, I discovered a surprising aspect of Leopalace21 that I would not know without investing.

Leopalace21 has a higher shareholder dividend than its stock price.

Note! !
This information is current as of September 20, 2019.
However, stock prices may fluctuate and shareholder benefits will change at the discretion of the company, so please check with your own eyes when investing.

When I researched about Leopalace Resort Guam, the thing that caught my eye was not the bad reputation of the hotel, but the investor’s tweets.

Investors say “Leopalace Resort Guam” does not seem to be a big scandal of Leopalace 21.
Instead, it seems to be reminiscent of a hotel free voucher that can be given to shareholders.

Let’s calculate all the time. 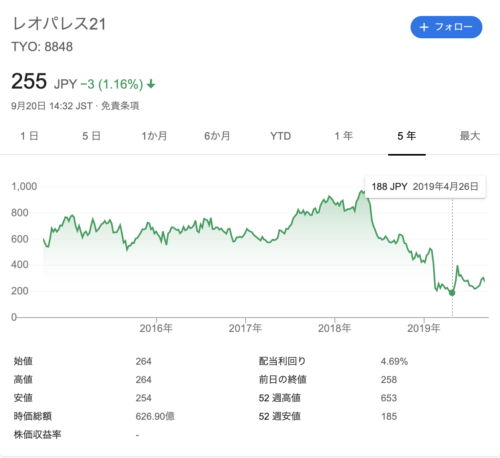 Leopalace21’s shareholder special offer allows you to stay for free in twin rooms. If you have 100 shares, you can get two free tickets.

“If you are alone, you may not have the money!”
Don’t worry, there are still shareholder benefits.
Leopalace21 comes with not only a free ticket for resort hotels in Guam but also a half price ticket for hotels in Japan.
You can get that ticket for about $ 50 in a regular room, and even if you want it, even a suite can be reduced to half price.
Of course, two half-price tickets are included. So when you stay in Japan, you can save 2 nights.

Is n’t it cheap enough to sound suspicious?

That’s no surprise.
There is a clear reason.

Now, the price of Leopalace21 has plummeted to one-third of the usual.

“Leopalace21 is a notorious company in Japan.”
I talked a little about that.

Certainly, the reputation has been bad for a long time.

Forced sales to landlords.
A house full of defects, such as those offered only at Leopalace21.
If you worked with them, you might have been amazed at the violent behavior of the people who had worked in the past Leopalace21. (Sorry, this is my experience.)

However, these were only rumors until a year ago.

It was the TV Tokyo program “Dawn of Gaia” that people in Japan learned that the infamous rumors were true.

The actual situation of illegal architecture that Leopalace21 has gone through was made public by the interview of the program.

The Ministry of Land, Infrastructure, Transport and Tourism held a conference and answered.
However, the fact that there were many properties that violated the Building Standards Law (1895 buildings as of the end of 2019) became known to the public thanks to the precise coverage of TV programs.

In addition, in February 2019, there were 1324 new properties with poorly constructed walls and ceilings.
Among those who were moving in, 7,778 people were requested to move quickly.

As a result, Leopalace21’s stock price plummeted to one-third of the normal price.

Indeed, Leopalace21 credit fell to the ground.
However, the business condition of Leopalace is not significantly affected.

Therefore, even if the shareholder special benefit system itself disappears, there is little worry that the stock certificate itself will run out of paper.

I said “out of paper” … but it’s not. Because stock certificates are digitized.

Let’s return the story to the shareholder coupon.

Leopalace21’s shareholder benefits are definitely a great deal.
However, it is not surprisingly popular.

The largest auction site in Japan, Yahoo Auctions, sells Leopalace21 shareholder coupons for around ¥ 1000 (about $ 9). 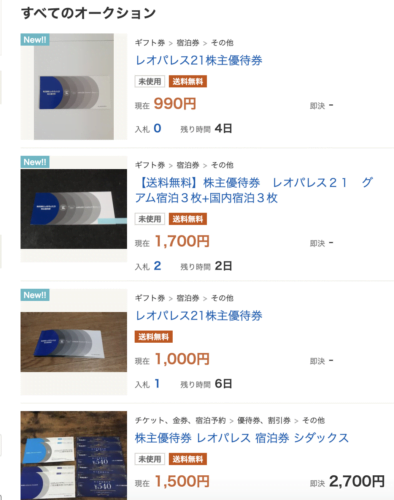 I felt wondering.
So, I decided to ask my friends who are familiar with investment and shareholder benefits why.
” That’s … I can’t get it without going to Guam. ”
I was suddenly aware! !

Therefore, no one goes to Guam to use shareholder coupons.
In the first place, investors do not want to use Leopalace21 Hotel.
If you want a fun trip or a fun vacation, investors will invest well in their vacation.

However, Bill Gates and Warren Buffett are famous for their stingy, so “Leopalace 21 is good”
“When you go to work, use cheap accommodation in Leopalace21.”
They may tell you.

Shareholder profits used only by the poor and stingy are not attractive to investors who have money.
Not just investors.
If it is not cheap for ordinary people, there will be few people who want to choose.

Shareholder benefits coupons should not be judged by face value alone.
I think Leopalace21’s shareholder coupon offers us a great lesson.